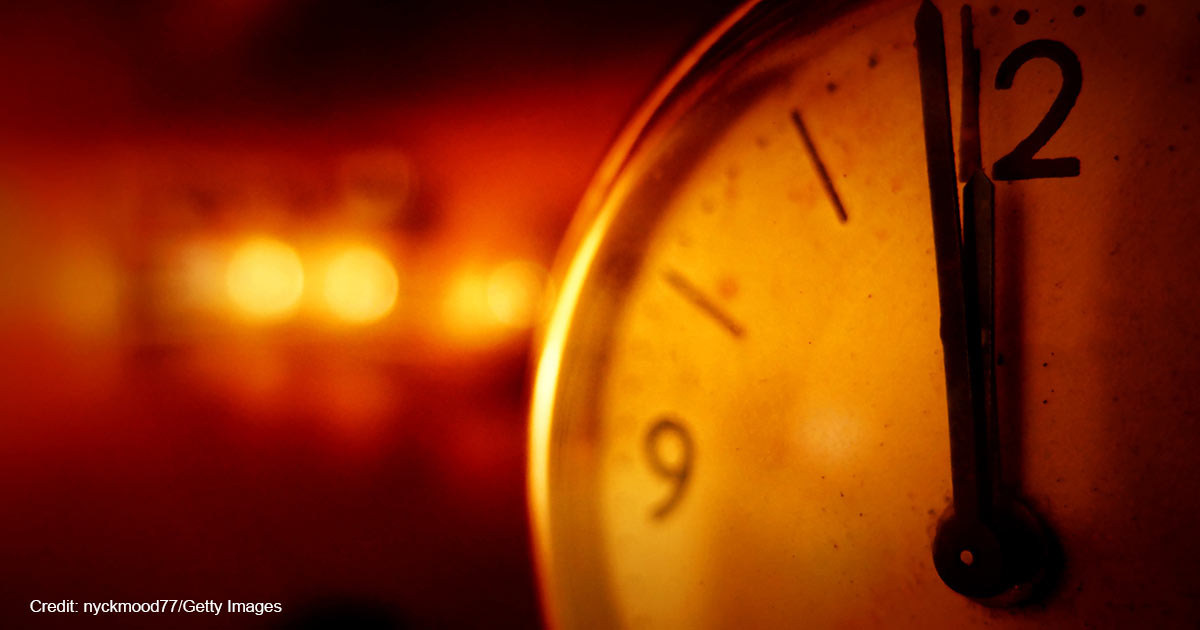 Jesus on Doomsday Clock: ‘See That You Are Not Alarmed’

The Science and Security Board at The Bulletin of Atomic Scientists released their annual Doomsday Clock report on Tuesday, advancing the time to an “unprecedented” 90 seconds from midnight. Maintained since 1947, the Doomsday Clock quantifies how close the world is to utter disaster, in the opinion of the Bulletin of Atomic Scientists. They chose to move the clock closer to midnight “largely (though not exclusively) because of the mounting dangers of the war in Ukraine.” The new rating is intended to indicate that the world is “the closest to global catastrophe it has ever been.”

“The war in Ukraine may enter a second horrifying year, with both sides convinced they can win,” warned The Bulletin. They worry about how Russia’s invasion is “eroding norms of international conduct,” “Russia’s thinly veiled threats to use nuclear weapons,” the war’s tendency to “undermine global efforts to combat climate change,” and “the continuing stream of disinformation.”

However, since 2015, when it was moved to three minutes to midnight, the clock has only ticked down. It first ticked under two minutes in 2020 to 100 seconds from midnight to indicate that “the international security situation is now more dangerous than it has ever been, even at the height of the Cold War.”

For all the fear junkies wondering where to find their next kick absent a global pandemic, this alarmist estimate should do the trick. The elements of truth it contains are that Russia’s invasion of Ukraine has made the world a more dangerous place, and we probably are closer to disaster than anyone realizes. Previous threats, such as Iran’s growing capability, remain a problem. But it’s fair to question whether the clock’s measuring stick has become skewed somewhere over the past 75 years.

Yet even while we strive to promote peace and flourishing in this world, Christians need not be alarmed by whatever time the keepers of the Doomsday Clock say that it reads. “You will hear of wars and rumors of wars,” Jesus told his disciples. “See that you are not alarmed, for this must take place, but the end is not yet” (Matthew 24:6). “Doomsday” refers to the day of final judgment, when God will read to men their final “doom,” and has appropriately been generalized as an idiom for any general disaster (cf. Isaiah 2:19).

What does it mean to not be alarmed? When we hear of wars, rumors of wars, earthquakes, and other tragedies, our first reaction should be, “Jesus said this would happen. These circumstances are not out of his control.” We might think, “How horrible! What vast and indescribable human suffering!” Compassion is a perfectly natural, not to mention Christian, response. But we mustn’t think, “What is the world coming to?” or “Now my plans are all ruined.” Instead of reacting with dismay, let us respond in faith and trust Jesus. He created all things, including “thrones or dominions or rulers or authorities,” which are held together in him (Colossians 1:16-17).

When the real Doomsday, the final Doomsday, comes, then John’s vision will come to pass, “I saw the dead, great and small, standing before the throne, and books were opened. Then another book was opened, which is the book of life. And the dead were judged by what was written in the books, according to what they had done” (Revelation 20:12).

One other reason to quell our alarm about the Doomsday Clock is that the experts at The Bulletin of Atomic Scientists don’t even know when the final Doomsday will arrive. “Concerning that day and hour no one knows, not even the angels of heaven, nor the Son, but the Father only” (Matthew 24:36).

Why put too much stock in the opinion of someone who doesn’t know what’s really going on either? Instead, consider how Jesus applies this fact, “Stay awake, for you do not know on what day your Lord is coming” (Matthew 24:42). Live always as if Jesus could come back at any moment — because he can — whether the Doomsday Clock stands at 90 seconds, or one second, or 15 minutes, or a whole day.