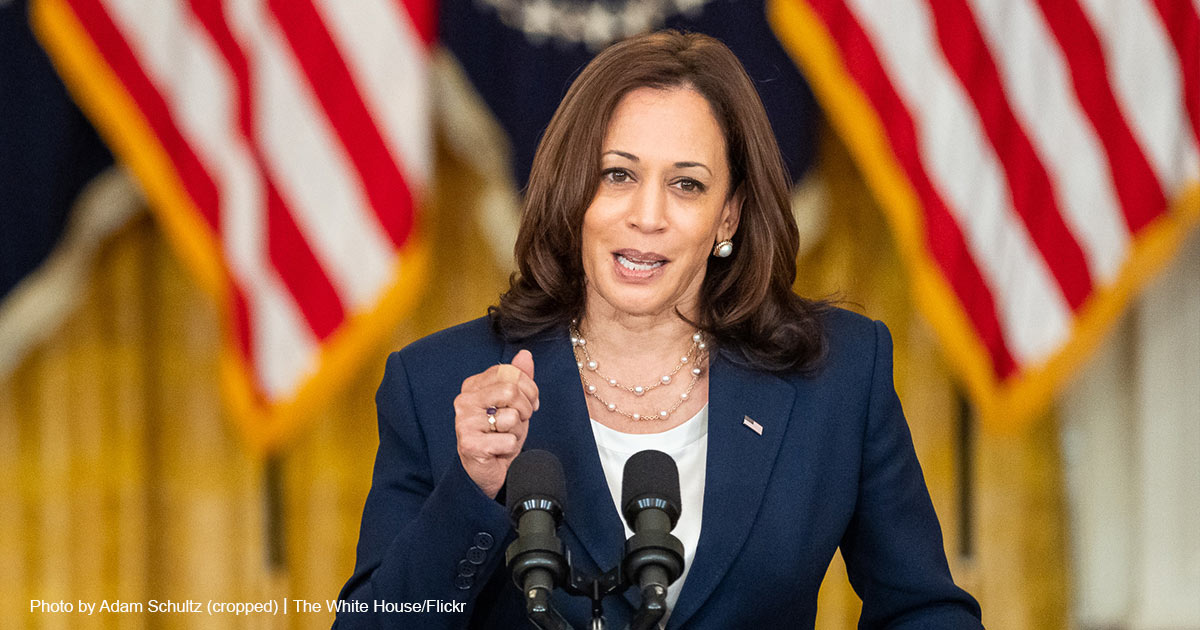 Former President Bill Clinton tried to soften the Democratic Party’s image as extreme liberals by insisting, “I am not pro-abortion.” Over the weekend, Kamala Harris opened a widely panned speech on abortion by saying she and President Joe Biden “love” abortionists, before concluding her speech, “God bless America.”

The vice president went on to imply that Americans’ unalienable rights do not come from our Creator; omit the right to life from the Declaration of Independence; hint that the national anthem supports abortion; accuse pro-life advocates of attacking the “foundations of freedom; and claim an LGBT riot, in which drag queens tried to burn policemen alive, represents “the strength of our nation.”

Harris delivered an address in Tallahassee, Florida, on Sunday to mark what would have been the 50th anniversary of Roe v. Wade, an anniversary aborted last summer when the Supreme Court overturned the case, which first invented a constitutional right to abortion. Planned Parenthood had already planned to hold a “Rally in Tally” before Harris joined their lineup; Planned Parenthood CEO Alexis McGill Johnson spoke earlier in the event. An abortionist with Planned Parenthood of Southwest and Central Florida, named Sujatha Prabhakaran, introduced Harris after leading the crowd in a rousing chant of “Abortion is health care!” (In reality, the Hippocratic Oath states, “I will not give to a woman a pessary to produce abortion. With purity and with holiness I will pass my life and practice my art.”)

“We love” abortionists. Arriving at the podium, a confused Harris began by asking where Prabhakaran had gone. “We love all of our frontline folks,” said Harris, referring to abortion industry employees. “And this room is filled with them.”

Harris then delivered a speech that rang alarm bells nationwide for its secularism and historical revisionism.

Erasing the Creator and the right to life. Harris seemed to state that Americans’ unalienable rights do not come from God but from a social contract among voters. “America is a promise; it is a promise of freedom and liberty, not for some, but for all — a promise we made in the Declaration of Independence,” she said. Harris then left out our founding document’s reference to the right to life, saying, “We are each endowed with the right to liberty and the pursuit of happiness. Be clear: These rights were not bestowed upon us. They belong to us as Americans.”

The Founding Fathers designed a form of government that would restrain the government from violating Americans’ God-given rights, including the right to life. Thomas Jefferson wrote in the Declaration of Independence, “We hold these Truths to be self-evident, that all Men are created equal, that they are endowed by their Creator with certain unalienable Rights, that among these are Life, Liberty, and the Pursuit of Happiness — That to secure these Rights, Governments are instituted among Men.” (Emphases added.)

Both Joe Biden and Barack Obama regularly omitted the Declaration’s reference to “the Creator” — a rhetorical gambit that critics say undermines freedom and liberty.

“We need to know our history and challenge those who want to selectively edit or change our founding documents, because it matters that our rights come to us from God — that they are not a grant from government,” said Family Research Council President Tony Perkins on “Washington Watch” Monday. “When you take God out of the equation … it enables these power-hungry bureaucrats and politicians to try to usurp those rights.”

Star-Spangled abortion? Harris continued reimagining the nation’s founding when she implied that abortion rings through every line of our national anthem. “Here is a collection of words that mean everything to us as Americans: the heartfelt words of our great national anthem, that America is ‘the land of the free and the home of the brave,’” she said. “But let us ask, can we truly be free if a woman cannot make decisions about her own body?” Abortionists destroy a child’s body by suction/aspiration or dismemberment; they have also injured or killed the mother.

Protecting 6.9% of babies from abortion is extreme? Harris chided “so-called leaders at the statehouse here in Tallahassee” for passing “a radical abortion ban.” Thanks to the bill, she said, “health care providers face prison for up to five years for simply doing their job.”

Governor Ron DeSantis (R) signed a bill last year protecting unborn babies from abortion after 15 weeks, or slightly after the first trimester. Abortionists commit “nearly all” U.S. abortions (93.1%) before 13 weeks gestation, according to the Biden-Harris administration’s most recent abortion surveillance. A full 72% of Americans support such a law, according to a Harvard/Harris poll.

The “health care providers” Harris mentioned were abortionists, whose job entails ending the life of a child, which begins at fertilization.

“How dare” Republicans protect life? Pro-life politicians “attack the very foundations of freedom,” Harris continued. “Republicans in Congress are now calling for a nationwide abortion ban. Some even from the moment of conception” — which, embryologists agree, marks the moment a child’s life begins.

Allowing abortion-on-demand does not contradict any faith? Harris once again tried to appeal to Americans to lay aside faith-based objections to abortion. “One does not have to abandon their faith or deeply held beliefs to agree that the government should not be telling people what to do with their own bodies,” she claimed. Christians have held that abortion violates their faith, and should be illegal, for 2,000 years. Orthodox Jews also say they hold a pro-life faith. However, the Satanic Temple regards abortion as a sacrament.

The “strength of our nation” was secured by LGBT rioters who attacked police. Harris told the crowd of abortion industry employees and lobbyists that they must have “the kind of determination” that motivated “our greatest patriots,” including “those Americans who fought a Civil War to end the sin of slavery, who organized at Seneca Falls to secure a woman’s right to vote, who launched the Freedom Rides to advance civil rights, and spoke out at the Stonewall Inn to defend human rights.”

On June 29, 1969, six New York City police officers raided the Stonewall Inn, a seedy bar operated by the Mafia without a license, on a morals charge. Thousands of LGBT rioters surrounded the half-dozen cops, pelted them with bottles, and attempted to burn the bar to the ground with them inside. “Our goal was to hurt those police,” said rioter John O’Brien. “I wanted to kill those cops.”

In 2016, Barack Obama named the Stonewall Inn a national monument.

Harris attempted to encourage the crowd, dispirited by pro-life gains since the Dobbs ruling. “We’re on the right side of history,” she told the crowd.

Inverting historical, moral, and religious truth so completely is not accidental but an attempt to demonize the Founding Fathers, repeal the Constitution, and establish an alternate form of government, Barton said.

“I think it’s very hard to argue that Kamala Harris or President Biden don’t understand the positions they’re taking, and they’re doing it intentionally to promote a political ideology philosophy,” Barton told Perkins. “They are working, as President Obama once said, to fundamentally transform America.”