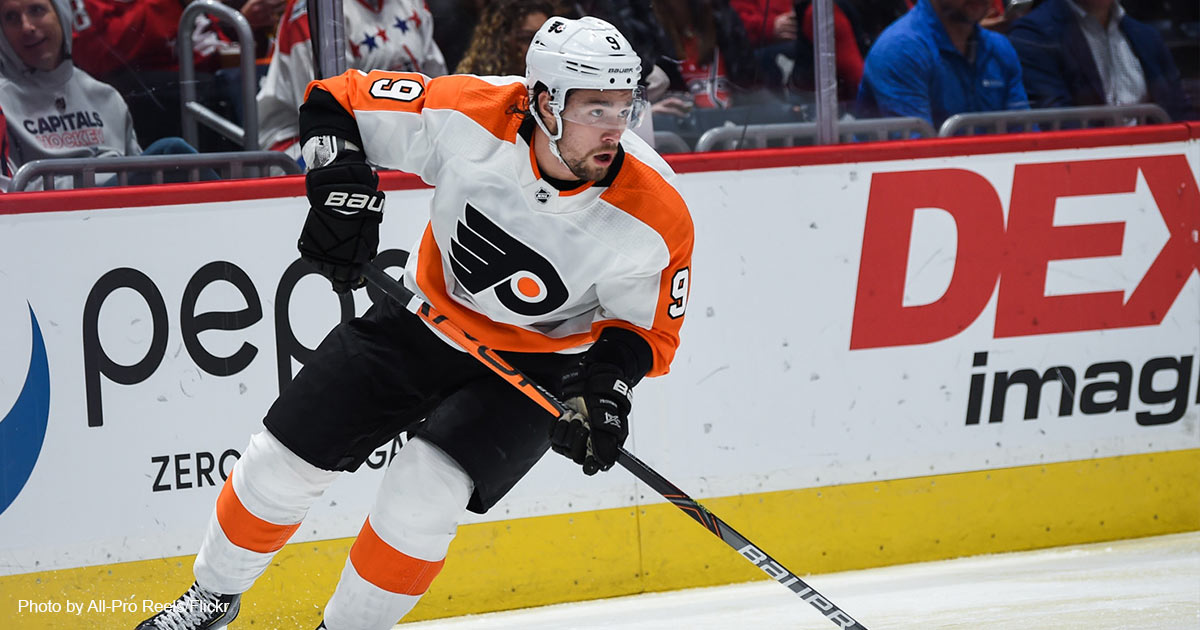 As someone who's been a season ticket holder of the Washington Capitals since before Alex Ovechkin could drive, the idea of sitting through another NHL Pride Night — when everything we love about hockey is drenched in politics and phony rainbow pageantry — was a non-starter. So we sold our tickets for Tuesday’s game. Unfortunately, not everyone who wants to sit out the league’s pandering can make such an easy choice. But for Philadelphia Flyers’ defenseman Ivan Provorov, easy isn’t what mattered. Staying true to his convictions was.

While his team was wrapping their sticks in rainbow tape and skating onto the ice like an advertisement for the Human Rights Campaign, Provorov waited in the locker room, ready for warm-ups — and the NHL’s annual LGBT lovefest — to be over. His decision to opt out of the special Pride jerseys and forced worship of an in-your-face agenda, was brave, especially for a league that’s increasingly following in the woke footsteps of sports’ other big three: the NFL, NBA, and MLB.

But respect — which used to be the rallying cry of the LGBT movement — isn’t enough. Not anymore. Longtime hockey commentators eviscerated Provorov on social media, accusing him of insulting everyone simply for holding different beliefs. Senior NHL columnist Pierre LeBrun of The Athletic wasted no time bashing the decision, arguing that if the defenseman truly respected “everyone,” “he would have taken part in warm-up [sic] and worn the Pride Night jersey. Don’t hide behind religion.”

My husband, bless his heart, tweeted back that since LeBrun is Canadian, he probably doesn’t understand things like the freedom of speech and religion. “I can respect someone without agreeing with them,” Bob fired back. “Being forced to wear political speech isn’t an American value.”

Instead of living and letting live, like the Left claimed it wanted all those years, the mob demands 100% conformity now. That means bowing down to their altar of sexual confusion — or else.

The Twitter world piled on LeBrun, pointing out the irony of the Left’s “choice” mantra. “Ohhh,” another tweeted, “so if he did ‘respect everyone’ he would have submitted. Gotcha. The problem with today is, if you don’t do as I say and kneel … or wear a pride jersey, you are immediately labelled homophobic or racist. It’s his choice. Do you understand that? “Choice”.”

TSN’s Gord Miller was just as hostile as LeBrun, admitting that while Provorov “had the right to refuse to participate,” the team should have punished him for it. “The Flyers should have responded by not allowing him to play in the game. Freedom of expression doesn’t give you freedom from the consequences of your words or actions.”

On both men’s Twitter feeds, Provorov’s defenders far outweighed his critics. “Why are we forcing other people’s beliefs on him?” one user asked. Another pointed out the hypocrisy. “It’s interesting that people are wanting him scratched for not being inclusive on a night celebrating the inclusiveness of all beliefs.” “He wasn’t disrespectful,” people pointed out. “At least he stood by his convictions. That’s more than I can say for most people today,” another said.

Southern Baptist Theological Seminary Professor Andrew T. Walker highlighted the story on his account, writing, “Given today’s culture, it takes more courage to do this than it does to defend the legitimacy of miracles or even the exclusivity of Christ. Elite culture may reject or ridicule miracles and exclusivity, but it seethes at having the idols of identity questioned.”

Other moral high-horsers, like outspoken hockey writer Greg Wyshynski, tried to drag Ukrainian politics into it, taking cheap shots at the fact that Provorov didn't mind wearing a military appreciation jersey. “Wait, so Greg, what are you suggesting here? Support of the US military is a bad thing? All military supporters are homophobic? I’m happy to let you explain further, b/c I would hope that my initial reaction is wrong and that this isn’t you sending out a bat signal of sorts,” one user fired back.

Asked why he didn’t bench Provorov for his decision, Tortorella replied, “I just think it’s unfair. I know you’re probably going to talk to Provy,” he said. “I’m not going to spend a lot of time on it. I think it was a great night, and I’m not going to get too deep into the conversation.”

Although Provorov probably felt isolated in his decision, he’s far from alone. The sports world is full of professional athletes taking courageous stands for their faith. Soccer’s Jaelene Daniels lost her spot on the women’s national team when she refused to wear a Pride jersey in 2017. Last year, she stared down the same mob, getting benched for telling the North Carolina Courage she wouldn’t sport a transgender and rainbow-themed uniform because of her moral convictions. The Courage responded by publicly apologizing for ever signing Daniels.

Over in Major League Baseball, Tampa Bay Rays’ pitchers Jason Adam, Jalen Beeks, Brooks Raley, Jeffrey Springs, and Ryan Thompson caught the team by surprise when they told management they wouldn’t wear the rainbow logo because of their biblical beliefs. In a month when even the bases were rainbow props, the idea that any player — let alone several — would refuse to go along was a shock to the pro-sports’ system.

As for the NHL, the league’s leftward lurch has come with its share of bad PR. Not only did an internal review shame the NHL as “too white,” but their overcorrection managed to create a political mess they're still trying to clean up. Florida Governor Ron DeSantis (R) was especially outraged by one of the NHL’s job postings in Fort Lauderdale, where only people who “identify as female, Black, Asian/Pacific Islander, Hispanic/Latino, Indigenous, LGBTQIA+, and/or a person with a disability” were invited to apply.

“Discrimination of any sort is not welcome in the state of Florida,” DeSantis’s office said in a statement, “and we do not abide by the woke notion that discrimination should be overlooked if applied in a politically popular manner or against a politically unpopular demographic. We are fighting all discrimination in our schools and our workplaces, and we will fight it in publicly accessible places of meeting or activity.”

“We call upon the National Hockey League to immediately remove and denounce the discriminatory prohibitions it has imposed on attendance to the 2023 ‘Pathway to Hockey’ summit,” the office urged.

Meanwhile, in its rush to embrace transgenderism, the NHL held an All-Trans Draft Tournament in Wisconsin in December, bragging, “This was the first tournament comprised entirely of transgender and nonbinary players, with around 80 folks participating!”

Despite declaring “Trans women are women. Trans men are men,” the league found out just how reckless that mentality is when a biological female in their game was hospitalized after being slammed into the boards by a biological male. Because of the man’s strength and size, an otherwise innocent check turned violent. “Get a stretcher! Get a medic!” players shouted when she fell to the ice. It took 17 minutes to get her out of the rink. The league never did announce the winner of the game.

At the end of the day, Family Research Council’s Joseph Backholm told The Washington Stand, “We shouldn’t be surprised” by the vitriol directed at Provorov. “This is a competing religion,” he said of the LGBT agenda. But “nobody should be forced to celebrate a belief system they don’t share. It’s like asking a Muslim hockey player to celebrate Hanukkah and wear a menorah.” Frankly, Backholm said, “The surprising thing is that only one player objected — because we can guarantee there are more players than Provorov who don’t agree with the league’s extremism. But they’re hostages to the culture. So the fact that Provorov did it alone made it even more courageous.”

The irony, Backholm pointed out, is the NHL was supposed to be celebrating people living out their truth — but when Provorov tried to live out his, he was attacked. “Pride Night wasn’t a celebration of tolerance and inclusion. It was a celebration of conformity.”

The NHL loves to say, “Hockey is for everyone.” It’s time to prove it.