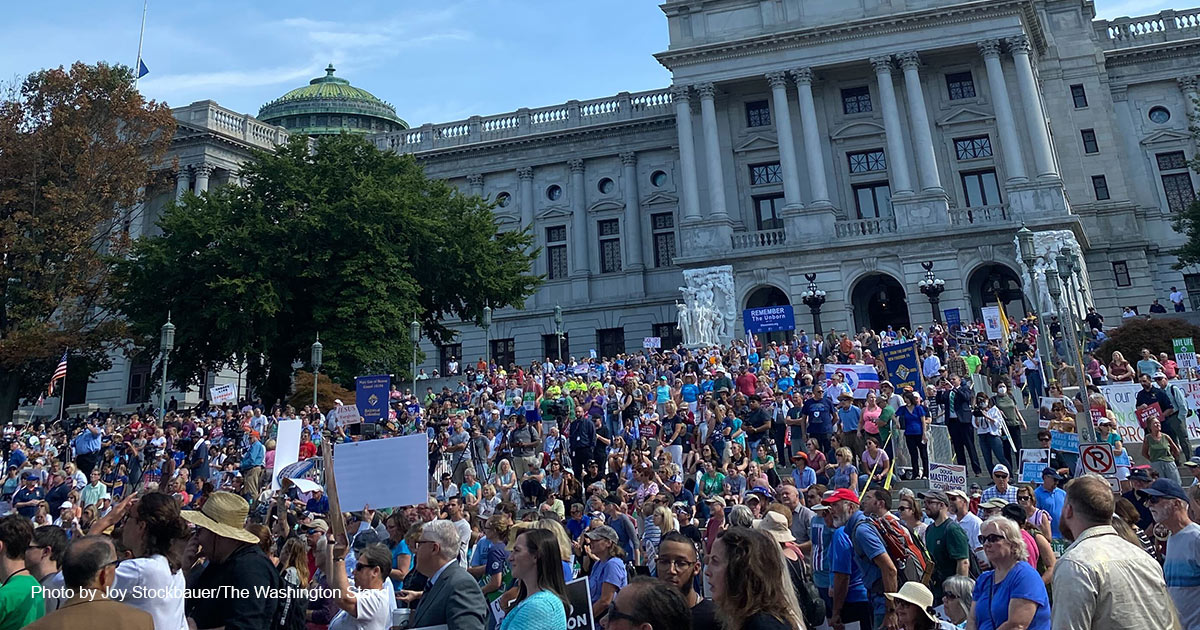 On Monday, the steps of the Harrisburg Capitol Building were packed with pro-life supporters who traveled from every corner of Pennsylvania to march for life. This event marked the first state March for Life in a post-Roe America — and offered fascinating insight into the dichotomy of enthusiasm between pro-lifers and abortion supporters.

The Pennsylvania Family Institute, who co-hosted the march, noted that the pro-abortion counter protest the following morning drew in less than 80 pro-abortion protestors. In comparison, over 6,000 pro-lifers marched on Monday — meaning that the PA March for Life was 75 times more highly attended than the abortion rally. This kind of pro-life enthusiasm shows that the legacy media’s insistence that the abortion issue will “deflate” Republican hopes in the midterm election is vastly overstated.

With state legislators returning to the state capitol this week to resume their session, the message they have received is unmistakably clear: their constituents want to see unborn life protected in Pennsylvania.

The atmosphere at the PA March for Life was joyful, welcoming, and, of course, family-friendly. Countless children marched alongside their parents; one little one even held a sign from the comfort of his stroller that read “Abortion = no hugs or kisses.” One young girl who was adopted told The Daily Signal, “I’m here to speak for the unborn children who could have a chance to be adopted.”

Various speakers at the event included members of the Pennsylvania legislature, as well as Dr. Monique Ruberu, who explained the dangers of the abortion industry’s medical disinformation, and Kathy Barnette, a Pennsylvania politician whose mother chose life after conceiving her in rape. Barnette told the crowd, “I am so grateful to God that there were adults who came alongside my very young mother and saw value in my life.”

After the march, women from the Silent No More Awareness campaign stood on the steps of the state capitol building and shared testimonials about receiving healing after undergoing abortions. One woman tearfully shared with the crowd that, though she changed her mind during her abortion appointment, she was held down by abortion facility workers while her unborn child was killed against her will.

Though the overturning of Roe v. Wade is an indubitable victory for unborn life, there is still much to be achieved at the state level. Pennsylvania currently fails to protect unborn lives before 24 weeks gestation — meaning that even some children who could survive outside of their mother’s wombs are being aborted. There are currently only 19 states in the U.S. that have laws to protect unborn life beginning at conception; and, in some of these states, the laws are being held up from enforcement by hostile state actors.

As a native Pennsylvanian, it is heartbreaking to know that even after the overturn of Roe v. Wade, my home state is still an incredibly dangerous place to be an unborn child. It pains me to think of the Pennsylvanian children who are missing from the neighborhood where I grew up — and to think of my high school classmates who are forever changed because they fell prey to the abortion industry.

But there is hope for Pennsylvania, and every other state in our country, to reverse course and protect the unborn from the injustice and brutality of abortion. There is perhaps no greater evidence of the growing passion and enthusiasm to protect life than the PA March for Life. It is this type of enthusiasm and confidence that protecting babies in the womb is the right thing to do that will win friends, neighbors, and communities for life. As we prepare for the midterm elections, I pray that we all show the same enthusiasm and zeal for defending life as the pro-lifers in Pennsylvania.