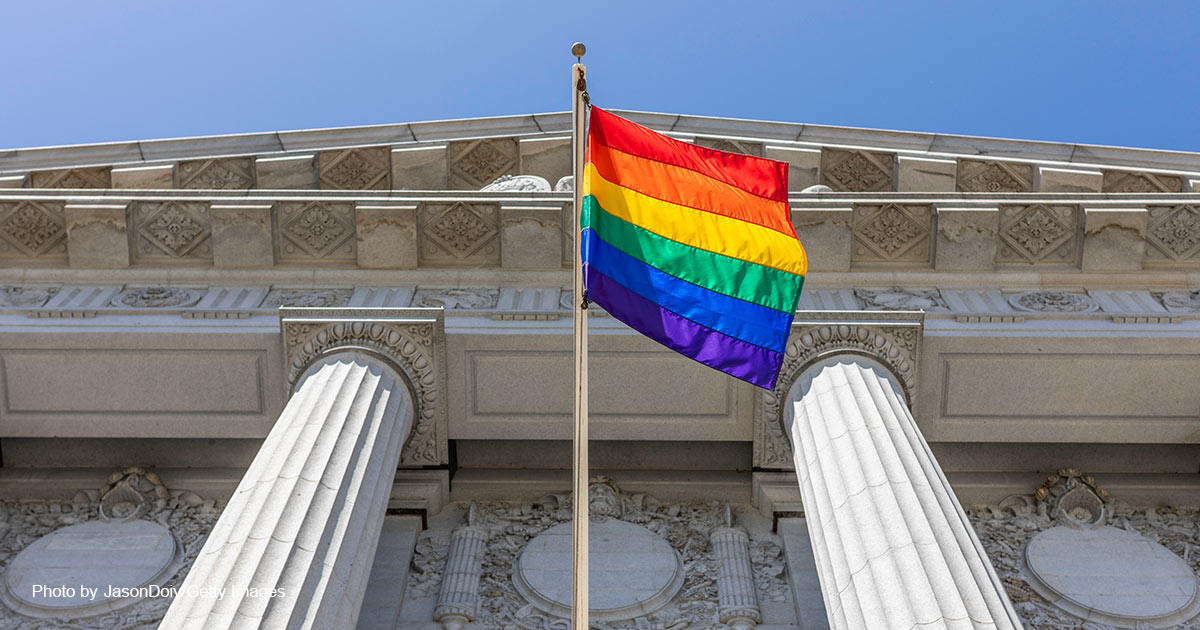 “We’ve all heard of people being cancelled, thrown off social media, even fired from jobs … But how many years before a Christian minister [who speaks] on marriage and sexual orientation is reported [to] a government anti-terrorism program?” For Reverend Dr. Bernard Randall, that time has already come. The chaplain of a Church of England School was suspended, fired for gross misconduct, and reported to child protective services simply for restating what the Church of England believes. If his story sounds like a distant outlier, it’s not. Randall’s nightmare will be every Christian’s nightmare if our Senate passes the Respect for Marriage Act.

“I was doing my job as per the job description,” Randall told a roomful of religious liberty advocates this July. Yet for being a Christian in a Christian school, he was painted “as a potential violent extremist [who] might draw others into violent extremism.” This, despite the U.K. Human Rights Act that declares, “Everyone has the right to freedom of thought, conscience and religion” (Article 9, 1998).

How long is it going to take for this to happen in the United States, he asked? “Is it under Biden? Is it under a second term of Biden-Harris?”

If congressional Democrats get their way, it happens now. Today, the U.S. Senate is voting on a bill that supporters are insisting is just an affirmation of the same-sex marriage status quo. As Senate Majority Leader Chuck Schumer (D-N.Y.) tells it, his party simply wants to cement Obergefell’s 2015 redefinition of marriage into federal law.

If only that were the case. Not only is this language light years more radical than the justices’ ruling seven years ago — cracking down on parents, charities, adoption agencies, teachers, Christian schools, counselors, and Bible-believing professionals — the government would be declaring open season on anyone who believes in marriage as it’s always been: the union of a man and woman.

As a former commissioner and chairman of the U.S. Commission on International Religious Freedom (USCIRF), I’ve seen the warning signs of this gathering like clouds across the Atlantic. As the mainstream culture moves further and further away from a Christian worldview, I’ve witnessed the hostility to moral truth creep closer to our shores. The West, once the safe haven of free speech and religion, is turning cold to the foundations that made our countries thrive. In a report released this July, FRC tracked 99 incidents of government attacks on religious freedom against Christians or Christian institutions across 14 Western countries in the last two years alone.

What will it say in two more if Americans are considered fair game by the Justice Department for their views on natural marriage? Under this bill, they are sitting ducks — prime targets for government investigation, prosecution, even civil action. H.R. 8404 is a stick of dynamite that, in the hands of the Left, would supercharge the attacks, the marginalization, and the oppression of people of faith and anyone who believes in marriage as human history defines it.

Reverend Randall came to Washington, D.C. to warn America that this was possible. “My story sends a message to other Christians that you are not free to talk about your faith,” he cautioned. “It seems it is no longer enough to just ‘tolerate’ LBGT ideology. You must accept it without question and no debate is allowed without serious consequences.”

Of course, Senate Democrats insist the threat to religious freedom that held up the bill this summer have been fixed. That “fix,” which is a few flimsy sentences clarifying that institutions won’t be forced to perform actual wedding ceremonies, does nothing to resolve the hammer this legislation takes to everyday people. It doesn’t protect the worker who doesn’t want to be coerced to celebrate LGBT Pride Month. It’s not going to protect the parent who says, “I don’t want my children indoctrinated with this abominable curriculum.” If anything, the misnamed Respect for Marriage Act will accelerate the persecution that we’ve seen in the last seven years to a level no one ever dreamed.

Päivi Räsänen learned the hard way that religious freedom laws are virtually worthless in the face of the secular mobs. The Finnish Parliament member could still be sent to jail for daring to tweet a Bible verse about sexuality in a country whose constitution states, “Everyone has the freedom of religion and conscience.” Like America, Finland is a European liberal democracy that ostensibly promises its citizens basic human rights such as freedom of speech, religion, assembly, equality under the law, and property rights, among others. But, as Rep. Chip Roy (R-Texas) and I cautioned, the Finnish government seems to have forgotten these core values.

How long until American lawmakers are similarly prosecuted?

My years of international advocacy include a powerful defense of the United Nation’s Universal Declaration of Human Rights, which affirms the ability “to manifest his religion or belief in teaching, practices, worship and observance.” And yet, if that declaration passed unanimously, and 192 countries now recognize the exercise of religious freedom as a fundamental human right, why was a commission created to track the abuses of religious liberty? Because many governments give mere lip service to this fundamental freedom.

Case in point: few would see Turkey as an enemy of freedom until Pastor Andrew Brunson — who I escorted back to the U.S. in my role at USCIRF — was imprisoned for more than two years. In Turkey, as in Finland, the U.K., and U.S., the constitution is clear: “Everyone has the freedom of conscience, religious belief, and conviction.”

My experience at USCIRF and around the world, for which I am immensely grateful, has shown me that religious freedom’s greatest threat is not a military force that eradicates or suppresses religious freedom, although that has certainly occurred. The greatest threat are policies like the so-called Respect for Marriage Act being considered by the United States Senate. They are what curtails the exercise of religious freedom — which leads not to a violent overthrow of this fundamental freedom, but to its systematic suppression and eventual loss.

America must understand: we cannot promote abroad what we will not protect at home. Including freedom.

Tony Perkins is president of Family Research Council and executive editor of The Washington Stand.