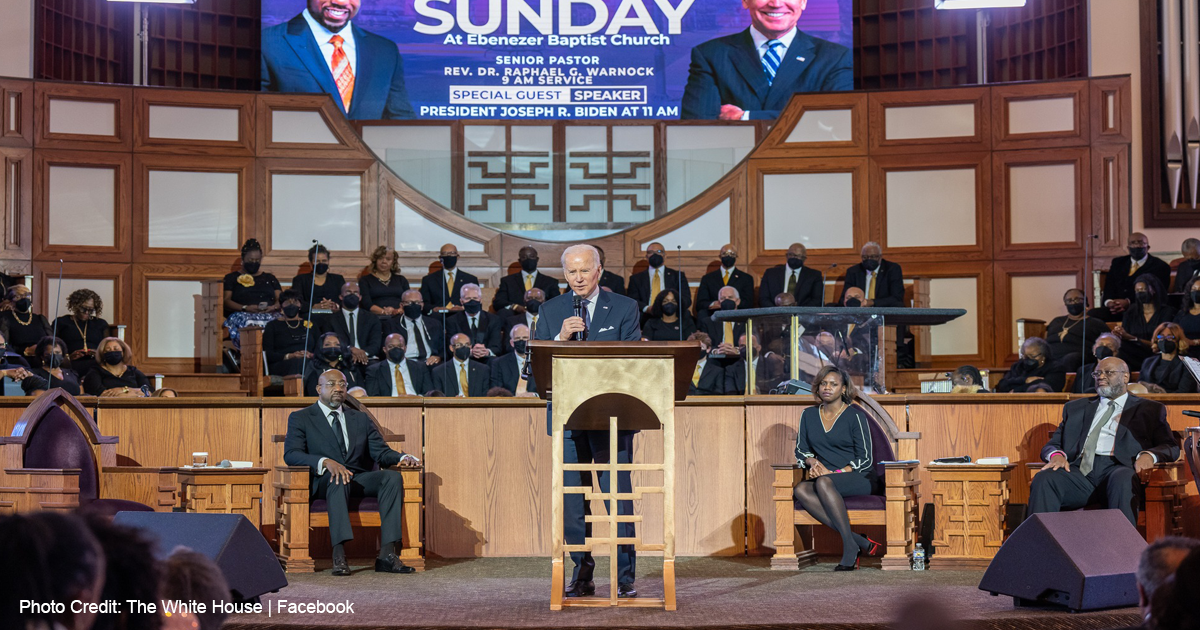 The Gospel According to Joe: Work to Achieve Progress

“Love the Lord thy God with all thy heart, all thy mind, and all thy soul, [pause] and love thy neighbor as thyself,” said Biden, roughly paraphrasing Matthew 22:37-39 and Luke 10:27. “In that commandment, in my view, lies the essence of the gospel, and the essence of the American promise.”

What a curious description Biden gave of these two commands (or did he mean only the second?). Yet Jesus called these the greatest commandments of the law, not the gospel, “On these two commandments depend all the Law and the Prophets” (Matthew 22:40). The apostles also described the command to “love your neighbor as yourself” as a summary of the law (Romans 13:9, Galatians 5:14, James 2:8).

The one biblical gospel is the good news about Jesus — his life, death, resurrection, and ascension. In the first Christian sermon, Peter explained that this gospel offers salvation in Jesus Christ “for the forgiveness of your sins” (Acts 2:38) — not according to the law. Paul later clarified that “the righteousness of God has been manifested apart from the law, although the Law and the Prophets bear witness to it — the righteousness of God through faith in Jesus Christ for all who believe” (Romans 3:21-22).

In fact, the Bible teaches that no can save themselves through the law. “By works of the law no human being will be justified in his sight” (Romans 3:20), wrote Paul. Or again, “All who rely on works of the law are under a curse; for it is written, ‘Cursed be everyone who does not abide by all things written in the Book of the Law, and do them’” (Galatians 3:10). The law is our guardian (Galatians 3:24), our prison warden (Galatians 3:22-23), and our teacher (Galatians 3:19, Romans 7:7-9), but not our way of salvation (Galatians 3:21, Romans 7:10). Even James warns, “Whoever keeps the whole law but fails in one point has become guilty of all of it” (James 2:10).One need only measure one’s heart by the greatest commandment to see that such human striving is worse than useless.

Returning to Atlanta, Biden stated that the command to love your neighbor is not only the essence of the gospel, but the essence of the American promise. Such interweaving of religious and political themes is a self-conscious attempt to foster an American civil religion — that is, a politically-oriented moral system — loosely based upon the moral teachings of Scripture. Civil religion was first proposed (although likely invented long before) by Jean-Jacques Rousseau, intellectual father of the French revolution, whose philosophy laid the foundation for Marxism. He argued that Christianity must be abolished because it was incompatible with his civil religion, which he said was necessary to create a totalitarian democracy. But his American disciples across the political spectrum have found it more expedient to co-opt Christianity to suit their purposes. The main problem with civil religion is that this process usually leaves true religion disemboweled, whittled down to a few cherry-picked verses that serve the speaker’s agenda.

Biden imbued the oft-repeated phrase “American promise” with a particular meaning: everyone is equal here. This, he explained is the soul of America. “What is the soul of America?” the president asked rhetorically. He then answered the question in lines lifted directly from his Independence Hall “Sith Lord” speech, “Soul is the breath, the life, the essence of who we are. The soul of America is embodied in the sacred proposition that we’re all created equal in the image of God.”

In that case, America’s redemption (buying back), as Biden sees it, is far cheaper than redeeming a single individual soul. For, “truly no man can ransom another, or give to God the price of his life, for the ransom of their life is costly and can never suffice, that he should live on forever and never see the pit” (Psalm 49:7-9). In the Old Testament, redeeming any living thing whose life had been forfeit to God required a blood sacrifice. Jesus is our Redeemer because he shed his blood in place of ours. In the gospel according to Biden, America’s soul can be redeemed without blood; “We the People” can accomplish it on our own power, without divine aid.

Indeed, in all of his discussion about America’s “soul,” outside of his recitation of the greatest commandment, Biden never once mentioned an individual’s soul, as Dr. King did. This is “the outcome of your faith,” Peter told Christians, “the salvation of your souls” (1 Peter 1:9) — plural. Biden focused merely on the “soul of America” — singular. This soul is not immortal, as it does not belong to a human being made in God’s image, and it does not even have a distinct existence. Jesus said, “What will it profit a man if he gains the whole world and forfeits his soul? Or what shall a man give in return for his soul?” (Matthew 16:26). In his Sunday address, Biden seemed absorbed in the affairs of this world to the exclusion of his own soul.

Dr. King was the great prophet of this campaign to redeem America’s soul, said Biden. “Like John the Baptist, he prepared us for the greater hope ahead, one who ‘came to bear witness to the light,’” (John 1:8). His “life and legacy show us the way, and we should pay attention,” he added. “We gather to contemplate [Dr. King’s] moral vision and commit ourselves to his path — his path — the path that leads to the beloved community.”

If Biden’s analogy holds, then Dr. King came to bear witness about a lesser light than John the Baptist. John bore witness to the Son of God come in the flesh, “the true light, which gives light to everyone” (John 1:9). He did so not by his life and legacy but by attesting to his identity and mission, namely that Jesus was “the Lamb of God, who takes away the sin of the world!” (John 1:29).

In comparison with Jesus Christ the Lord, Dr. King’s vision of a “beloved community,” as Biden describes it, just seems, well, unspectacular — not bad, just not the ultimate end of everything. Dr. King might have shown the way for man to reconcile with man, but Jesus Christ is the way for man be reconciled with God (John 14:6). While Biden and others might “gather to contemplate” how man can progress toward unity with one another, Christian churches gather to celebrate that we have achieved unity with Christ.

“Where do we go from here? Well, my message to the nation on this day is: we go forward. We go together,” Biden implored. “It’s when we see each other as neighbors and not enemies that progress and justice come.” Again, that’s a curious choice of words, because Jesus said both “love your neighbor” and “love your enemies” (Matthew 5:44).

And it’s not entirely clear how Biden expects the nation to move forward. On one hand, he suggested that America could construct the Tower of Babel where its first creators failed (Genesis 11:1-9). “This is the United States of America. The United States of America. There’s nothing beyond our capacity, nothing beyond our capacity if we set our mind to it.” On the other hand, he also expressed a dim view of human nature, “I don’t need to tell you that we’re not always at our best. We’re fallible. We fail and fall.” How can imperfect failures achieve perfect unity?

As expressed in this speech, Biden paints a largely biblical picture of human nature. Man has fallen into sin and now lies captive to it. And only Jesus Christ can rescue us. He gave his blood to wash away our sins. He gave his spirit so that we might have power to say “no” to sin. He gave his promise to never leave us.

But Biden concludes with a less-than-biblical solution. “We’re all imperfect beings,” he began. “We don’t know what fate [does he not believe in providence?] will deliver to us and when. But we can do our best to seek a life of light and life and love and truth.” Seriously, he concluded his sermon with, “we can do our best?” The Word of God contains a smorgasbord of rich promises to encourage the believer in their daily walk:

This list could go on for pages. Instead of any of these, Biden concludes with “we can do our best.” That’s like going to a buffet where all the food is made of styrofoam.

There were some vaguely Christian notes, which sounded dissonant in the unchristian key. “He didn’t bring me this far to leave me,” Biden said. That’s true — when not applied to earthly progress. Jesus said, “All that the Father gives me will come to me, and whoever comes to me I will never cast out.” Then Biden selectively quoted the hymn “Precious Lord, Take My Hand”: “through the storm, through the night, lead me on to the light.” Then he ended, “May God bless you all, and let’s go find the light.” Jesus is the light, which Christians have already found. The song refers our final reunion with him after death. The full verse has comforted many struggling saints and is a fitting place to end here:

Lead me on, help me stand,

Lead me on to the light,