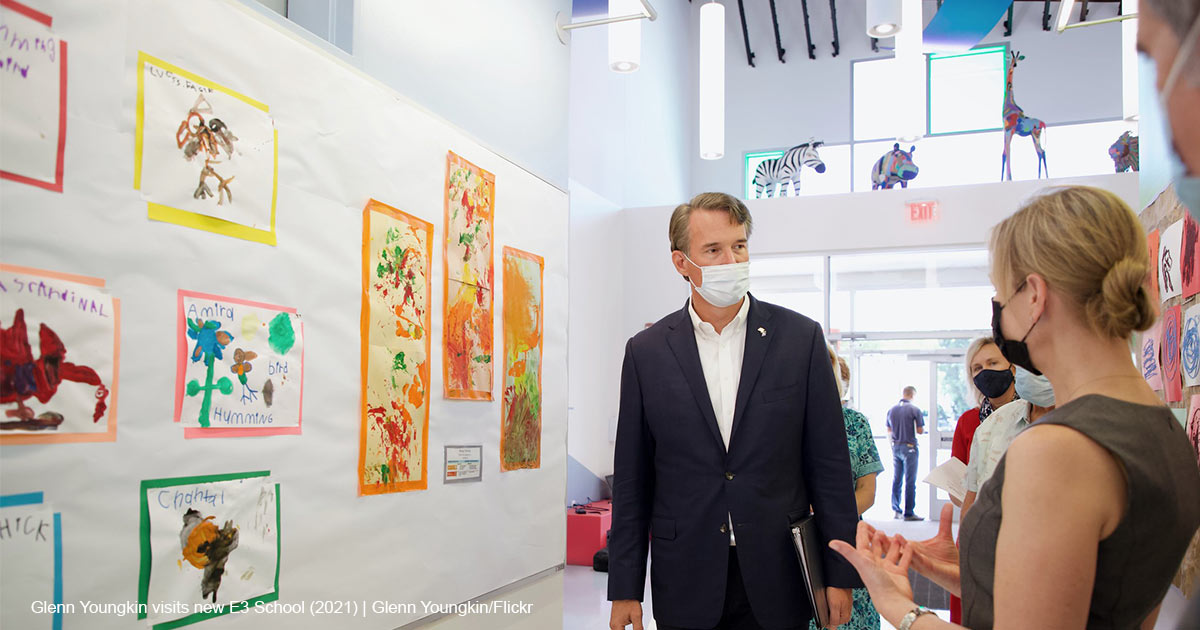 Virginia Is for Lovers of Parental Rights: Youngkin Rolls Back Trans Gains in Schools

If Virginia Governor Glenn Youngkin (R) hadn’t done anything since his shock win last November, he’d probably still be an improvement over his radical predecessor. For one, the Commonwealth wouldn’t have a leader who openly embraced infanticide. For another, voters would at least have someone on the record who believes that parents — not schools — know best. Fortunately for Virginians, though, Youngkin isn’t just about words — he’s about deeds. And late Friday, the man who vowed to “empower [parents] in the education of your children” kept his word.

Turning to the issue that got him elected, Youngkin is putting his own parental rights stamp on the state — formalizing a policy that would force every school district to drop the transgender extremism that made Virginia ground zero in the woke education wars. Under his newly released 2022 Model Policies, students can’t hide their alternate identities from parents, can’t access restrooms, programs, and facilities that don’t match their birth sex, and need mom or dad’s permission to change names and pronouns at school.

It is, in every way, a rebuttal of the radicalism that former Governor Ralph Northam (D) tried to impose on the state — and a very sweet reward to the 1.6 million Virginia voters who trusted this dad of four to take the parents’ side. In a political world not always defined by leaders upholding their promises, “It’s a really gratifying case of an elected official who ran for office promising to respect and defend parents’ rights … and is actually doing that,” Family Research Council’s Meg Kilgannon insisted.

But not everyone is thrilled by the return to sanity, and several outspoken Democrats haven’t wasted any time saying so. Delegate Mike Mullin (D) is outraged that parents will no longer be kept in the dark about their children’s gender confusion, calling Youngkin’s new guidelines “absolutely shameful.” This “model policy calls for the misgendering and outing of children in schools where they’re supposed to be safe,” he argues.

U.S. House Rep. Gerry Connolly (D-Va.) was equally furious, tweeting that not indulging these kids’ alternate realities is “a despicable display of bigotry and ignorance from the man who ran for office on the false promise of protecting Virginia students.”

Of course, as many people would be quick to point out to both men, Youngkin isn’t outlawing the use of opposite-sex pronouns or names. All he’s asking is that parents sign off — hardly a bridge too far for an education system that won’t even give a child a Tylenol without calling home. In other words, what Democrats are protesting isn’t the schools’ involvement — but parents’. Like Terry McAuliffe, who lost his election to the current governor over 12 words, a shocking number of leftists still admit — publicly — that they “don’t think parents should be telling schools what they should teach.”

“That is a proclamation,” Dr. Emir Caner said at the Pray Vote Stand Summit last week, “that your children do not belong to you but belong to the state. That is exactly what socialism and communism is.”

Meanwhile, every DNC strategist is reaching for their heartburn medication, knowing there’s no worse platform to run on right now than cutting parents out of the education debate. And yet Youngkin’s victory was not the teachable moment it should have been for Democrats, who still refuse to relax their grip on the public schools. Even U.S. House Rep. Jennifer Wexton (D-Va.) couldn’t help but pile on, shaming the policy as “a vile and disgusting attack on vulnerable trans kids.”

Tell that to Loudoun County parent Scott Smith, whose daughter was raped in a school bathroom by a boy wearing a skirt. If there is a “vile and disgusting attack” taking place, it’s been — and continues to be — on the schools’ other 99%. While the teenage aggressor went unpunished for weeks (eventually committing a second assault at the school where he was transferred), it was Scott who was sent to jail, asked to take anger management classes, and pay a fine. And it was Smith who was first called a “domestic terrorist” by the National School Board Association, igniting a firestorm from coast to coast.

Now, thankfully, Youngkin is challenging that leftist establishment to the very core. “The people who have dubbed this policy a ‘parents’ rights manifesto’ are not exaggerating,” Kilgannon says. “The document makes clear that parents are the primary educators of their children and schools cannot adopt gender affirming anything regarding a student without the parent’s permission. Over and over again, the requirement that parents be involved and fully informed is made abundantly clear.”

On the local level, administrators and school leaders are still poring over the new documents, trying to decide how — or even if — they’ll implement the order. The state’s largest school district, Fairfax County, made a vague pledge to “providing a caring climate and culture where each and every student, staff member, and family is welcomed, respected, valued, and supported, as they experience a deep sense of belonging” — all of which sounds positively uncontroversial until you consider how the district has decided to foster that “belonging” through secret gender transitions on campus.

The response from the Fairfax teachers’ union also doesn’t offer a great deal of comfort, claiming that Youngkin’s policy is “dangerous” and “detrimental to the mental health of kids.” “Most teachers will not follow these directives,” they insisted, “because they did not go into the field of education to hurt students.” Other activists, like Laura Stokes, had the audacity to argue that parents want to be cut out of the process. “I really don’t think what they’re proposing is in step with what parents actually want.” Glenn Youngkin’s own victory disproves that lie — as do the painful stories of so many moms and dads, who would have done anything for a warning that their child’s life was about to spiral out of control.

In Arlington, Superintendent Francisco Duran flat-out refused to comply, saying the district’s policies “regarding equal opportunities, nondiscrimination, and transgender students in schools remain in effect.” Prince William County was a little more diplomatic, promising to review the policies. In Loudoun, where the parents’ revolution was born, school officials had no comment. Their response, legal experts warn, may come in the form of lawsuits.

Meanwhile, conservatives continue to reap the rewards of propelling Youngkin to victory. “It’s refreshing to see somebody campaign on something and then actually fulfill those campaign promises once in office,” Fight For Schools’ executive director Ian Prior said.

At the end of the day, Caner pointed out, the struggle “is not between liberalism and conservatism. It’s between socialism and freedom. And the battleground is in the academy.” Thank goodness the state of Virginia finally has a governor in the fight.