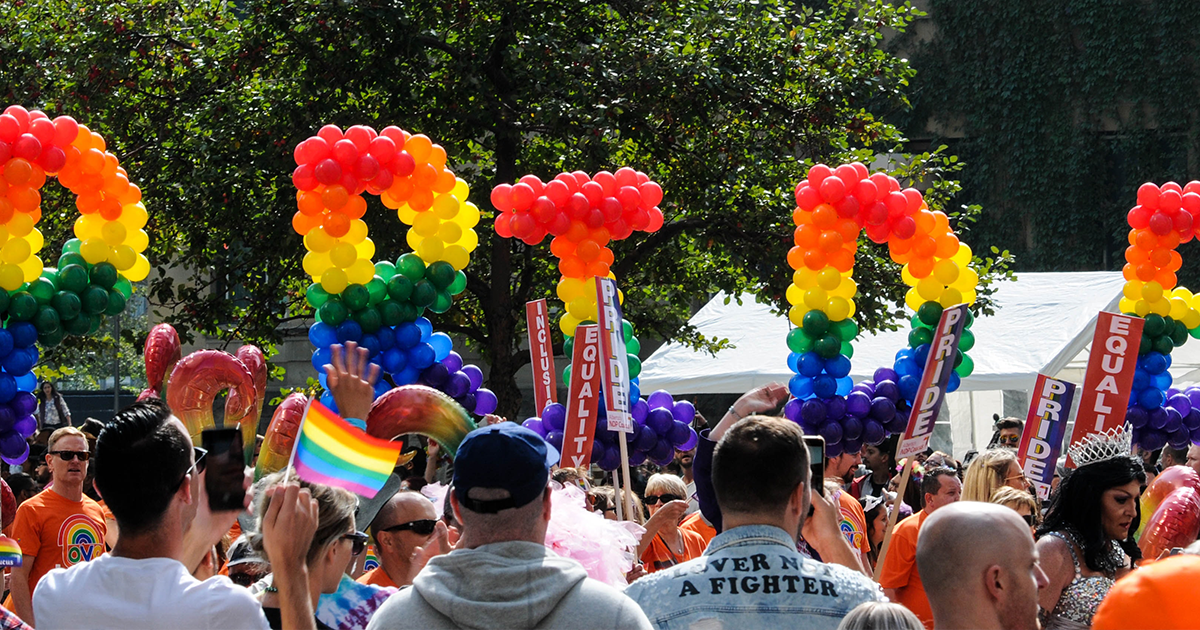 What Would Jesus Do with Pride Parades?

I recently came across my old WWJD wristband. These wristbands, which reached peak popularity in the 1990s, reminded wearers to consider “What Would Jesus Do?” as they went about their day. Although the phrase and the wristbands are less commonly used today, the question “What Would Jesus Do?” was posed in an article I came across recently that discussed Pride month. The same author published another article earlier this month that made the same point, namely that Jesus never condemned homosexuality and that if He were alive today, He would wave a rainbow flag and march in a Pride parade.

While conservative Christians may be tempted to dismiss these articles as clearly unbiblical, I believe it is naïve not to engage with these arguments. In fact, studies have shown that those who identify as Christian are increasingly open to pro-LGBT messaging and are willing to reconsider the Bible’s teaching on homosexuality. In fact, according to a 2020 study by the Cultural Research Center, 34% of evangelicals reject the idea that marriage is a relationship between one man and one woman. Despite professing faith in Christ, these evangelicals believe that Christian sexual ethics need to be revisited.

Thus, contemporary writers who argue that Jesus did not condemn homosexuality, like Michael Coren and Matthew Vines, cannot be ignored. According to Coren, Jesus was “radically indifferent” to homosexuality. Moreover, since the theme of the gospels is “love, acceptance, and a permanent revolution of grace,” Christians should affirm those who identify as LGBT.

Considering these recent arguments, how should conservative Christians respond to modern interpreters who argue that the New Testament allows for a pro-LGBT sexual ethic or that Jesus was indifferent to homosexuality?

First, it is true that Jesus never directly addressed homosexuality in the gospels. However, it is wrong to assume that because Jesus never addressed homosexuality directly, He would therefore have affirmed same-sex unions. This is an argument from silence and is unpersuasive. Notably, Jesus says nothing about rape, bestiality, or incest, and yet no one believes He endorsed these practices.

Others appeal to an ethic of love: Jesus would have supported same-sex relationships because His core message was one of love, and it is unloving to deny people who identify as homosexual opportunities for love and companionship. Despite its emotional appeal, this argument is also unpersuasive and ignores the available evidence that strongly suggests Jesus would not affirm same-sex relations. Two points are worth noting.

First, Jesus believed in the binding authority of the Old Testament Scriptures. In the Sermon on the Mount, Jesus explained He did not come to abolish the law but to fulfill it (Matthew 5:17). He also said, “Whoever relaxes one of the least of these commandments and teaches others to do the same will be called least in the kingdom of heaven, but whoever does them and teaches them will be called great in the kingdom of heaven” (Matthew 5:19).

In short, Jesus upheld the requirements of the Old Testament law. For example, when He heals a leper in Matthew 8, He tells him to go to a priest and “offer the gift that Moses commanded,” as Leviticus 13 requires (Matthew 8:4). On the few occasions Jesus “adjusted” Old Testament provisions — such as when He limits the grounds for divorce to sexual immorality in Matthew 19 — the New Testament is very clear. Because Jesus did not indicate otherwise, the only logical conclusion is that He fully agreed with the sexual ethics of the Old Testament and His Jewish heritage regarding homosexuality. To assume otherwise is an unwarranted argument from silence. (Note: Biblical scholars often make a distinction between civil, ceremonial, and moral laws in the Old Testament. Whereas the specific civil and ceremonial laws were fulfilled in Christ, aspects of the moral law are still in place. For example, the command to not commit adultery still stands, while the command that the Israelites execute those caught in adultery does not.)

Second, Jesus affirmed the creation pattern for marriage. When the Pharisees question Jesus about divorce in Mark 10, He responds by quoting Genesis 1 and 2. He says, “But from the beginning of creation, ‘God made them male and female.’ ‘Therefore a man shall leave his father and mother and hold fast to his wife, and the two shall become one flesh.’ So they are no longer two but one flesh” (Mark 10:7-8; cf. Matthew 19:4-6). According to Jesus, married couples should not divorce because marriage is a one-flesh relationship. He affirms the one-flesh nature of marriage by citing Genesis 2:24. But significantly, He also affirms the sexual differentiation of male and female by quoting Genesis 1:27. As ethicist Ken Magnuson notes, “If sexual difference, in terms of marriage and sexual relations, was unimportant to Jesus, there was no need for him to cite Genesis 1:27.” By drawing attention to humanity’s creation as “male and female” in the context of a discussion on marriage, Jesus signals His acceptance of the Old Testament’s vision for marriage and sexuality.

In addition to Jesus’s affirmation of the creation pattern for marriage, there are other verses in the New Testament that condemn homosexual practices. These include 1 Corinthians 6:9 and 1 Timothy 1:10.

In 1 Corinthians 6:9, Paul writes, “Or do you not know that the unrighteous will not inherit the kingdom of God? Do not be deceived: neither the sexually immoral, nor idolaters, nor adulterers, nor men who practice homosexuality.” Similarly, in 1 Timothy 1:10, Paul includes “men who practice homosexuality” as among the “lawless” and “disobedient.”

Both passages are significant for understanding the Bible’s teaching on homosexuality. Notably, they affirm the Old Testament’s prohibition on same-sex relations. Although each passage merits a lengthy discussion, only the most important details will be noted here.

First, in 1 Corinthians 6, Paul lists different kinds of people who will be excluded from the kingdom of God unless they repent. In the list, Paul includes four references to sexual sin, including two that mention homosexual behavior. The relevant terms are malakoi and arsenokoitai. Rightly interpreting these Greek words is crucial to understanding what Paul teaches about homosexuality. English translators render the relevant terms in various ways. Some translations combine the terms, whereas others render the words separately.

Although space does not allow for a lengthy treatment of these terms, a few points should be made. First, malakoi had a wide range of meanings in the ancient world. Often it meant “effeminate” or “soft.” It was also used in Hellenistic Greek as pejorative slang to describe “passive” partners in homosexual activity. At first glance, it might seem challenging to ascertain Paul’s exact use of the term in this passage. However, context is key. And the context of 1 Corinthians 6, with its mention and condemnation of sexual sin, indicates Paul is using the term to refer to passive partners in homosexual relations. This becomes clear by the placement of malakoi alongside arsenokoitai.

The second term under consideration is arsenokoitai, a compound word formed by combining arsen (“male”) and koites (“bed”). These terms are found in Leviticus 18:22 and 20:13, passages that prohibit homosexual relations. Leviticus 20:13 says, “If a man lies with a male as with a woman [meta arsenos koiten gynaikos], both of them have committed an abomination.” It seems clear that Paul had the Leviticus passages in mind when writing to the Corinthians. When paired with malakoi, it is almost certain that arsenokoitai refers to the active partner in a homosexual relationship. By using these terms together, Paul includes both active and passive homosexual partners within his list of those who will not inherit the kingdom of God.

Finally, in 1 Timothy 1, Paul includes arsenokoitai (translated by the ESV as “men who practice homosexuality”) on a list that includes sins (sexual and non-sexual) that do not conform to “sound doctrine” (v. 10). God’s law exposes these sins, and believers are exhorted to not participate in any activity that discredits the gospel or dishonors God (v. 11). Christians should repent of sin and pursue a life that is consistent with their new identity in Christ. It is worth noting that Paul once again presumes the Old Testament’s prohibition on homosexual relations.

Although more could be said, the New Testament does not allow for a pro-LGBT sexual ethic. Likewise, it is wrong to say that Jesus was indifferent about homosexuality. The Bible is clear about God’s design for marriage and sexuality and teaches that operating outside of God’s will only leads to pain and hurt. Thus, as June ends, we can be sure that Jesus would not have waved a rainbow flag or marched in a Pride parade. We can be equally sure that He would have ministered to those most caught up in the sexual sins of our day, speaking truth and love (Ephesians 4:15) to everyone entangled in the moral revolution.

We should do likewise.

David Closson is Director of the Center for Biblical Worldview at Family Research Council.