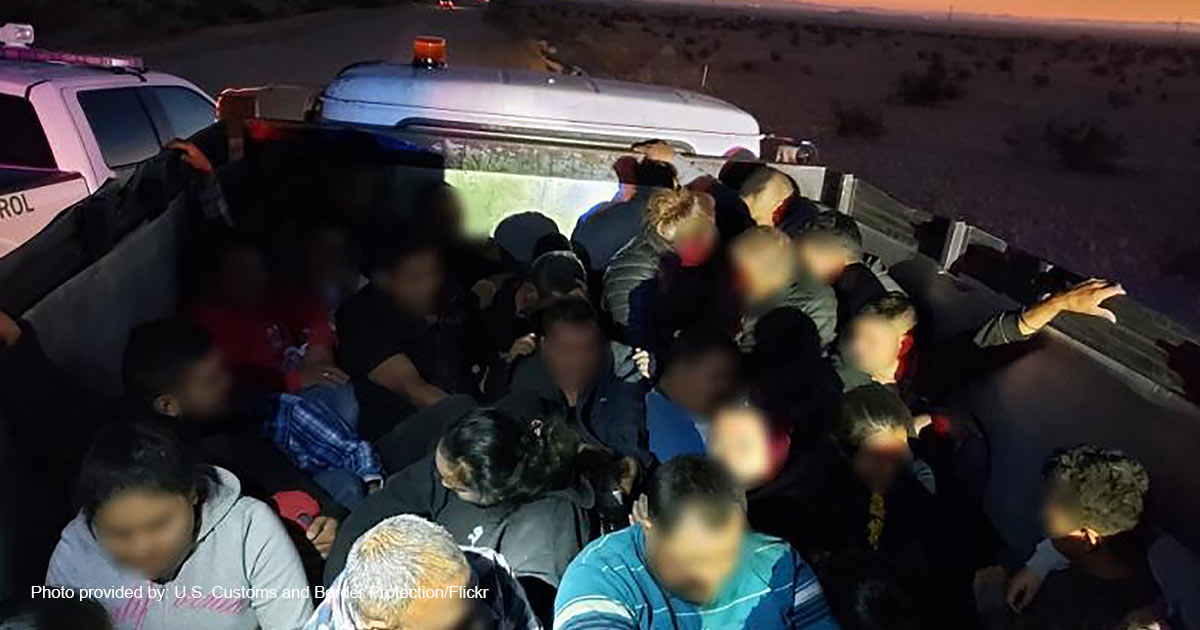 As the flood of illegal immigrants at America’s southern border crests to an all-time high, a Texas sheriff has called out the Biden administration’s immigration policies as creating a “class of slaves,” while also asserting that the real numbers of illegal immigrant crossings are far higher than what is generally understood. In his opinion, the administration is also “aiding and abetting” the flow of illegal narcotics into the U.S.

On Tuesday, Roy Boyd, sheriff of Goliad County, Texas, joined “Washington Watch with Tony Perkins” to discuss the magnitude of the humanitarian crisis occurring at the southern border.

“When you come down to South Texas, one of the things you have to realize is that the Border Patrol encounters over 100,000 illegal aliens crossing into the United States, just into Texas every month,” Boyd explained. “And [just] so you understand … Border Patrol, according to their own people on the streets, only encounter what they estimate to be 8 to 15% of the people that actually illegally cross into the United States.”

Boyd went on to submit that the Biden administration’s border policies have created a form of human subjugation that has spiritual consequences.

“It’s an invasion that’s being brought on by transnational criminal organizations in Mexico that are bringing a peon class of slaves into the United States,” he said. “This is an epic battle of good versus evil, because we have a government that is actually promoting the movement of slaves from one country to another. … These people are being put into indentured servitude in the United States.”

Boyd’s sentiments echo the words used by authorities in Georgia in December 2021, when a “modern-day slavery” ring was uncovered that freed at least 100 illegal immigrants from inhumane working and living conditions, in which at least two died, others forced to work at gunpoint, and another repeatedly raped. The perpetrators were part of a “transnational criminal organization” that “engaged in human trafficking, visa fraud, forced labor, mail fraud, money laundering, and other crimes that earned the collaborators more than $200 million.”

“We have encountered people here at the sheriff’s office who thought they were coming to the United States to be reunited with their families, only to find that they were going to be placed into bondage in unspeakable situations here in the United States,” Boyd maintained. “This should not be happening.”

Since President Biden has taken office, over 3.5 million illegal border crossings have occurred, with month-to-month apprehensions showing an over 300% increase when compared to the same timeframe under former President Trump. The Border Patrol is currently encountering as much as 8,000 illegal immigrant crossings a day, the highest ever recorded number.

Meanwhile, newly released data from Customs and Border Protection show that 2,204 pounds of fentanyl was seized at the border in the month of August, which is enough to cause 500 million lethal doses. Fentanyl-driven overdose fatalities are currently the leading cause of death for adults between 18 and 45 years of age.

Boyd pointed to current government policies as a contributing factor in the illicit drug problem at the border.

In July, Democrats unveiled a bill that would decriminalize marijuana at the federal level. So far, 26 states plus the District of Columbia have decriminalized marijuana possession. In Oregon, which is run by a Democrat administration, highly addictive and potent drugs like cocaine, methamphetamine, heroin, and other controlled substances have been decriminalized. In San Francisco, the Board of Supervisors recently voted to decriminalize psychedelics.

“It’s a symptom of a sickness,” Boyd told Perkins. “We have to cure it. … We’ve turned our back on God, and we’re no longer following what the blessings would be under Deuteronomy 28. We’ve gone on to the curses, and I think that we’ve only seen a tip of the iceberg when it comes to the misery we’re going to face as a result of the fact that we’ve lost our way.”

Perkins concurred with Boyd’s stark assessment. “Many Republicans talk about the drugs coming into the country, that’s the supply,” he said. “You talk about the demand. And that’s really at the heart of the matter is what is driving this demand for drugs. Yes, there’s an incentive on behalf of the policies of this country to bring those drugs in. But there’s also that void that’s in the heart of so many people, because we’ve pushed God out of our public discussion and dialog today.”

“You’re right,” Boyd responded. “God is what fills that void. … We think of ourselves as being superior beings when in reality we are not. We are just here to serve. … [J]ust like it says in the book of Isaiah, woe to those who call good evil and those who call evil good. And unfortunately, we find ourselves in a time when much of our society has turned everything backwards, including our government, as it pushes this agenda on us to dumb us down and to drag us farther and farther into this … abyss that our country will not be able to come back from if we don’t turn back towards the Lord.”